Only the marker buoys are visible

Click on the right to see the deployment process 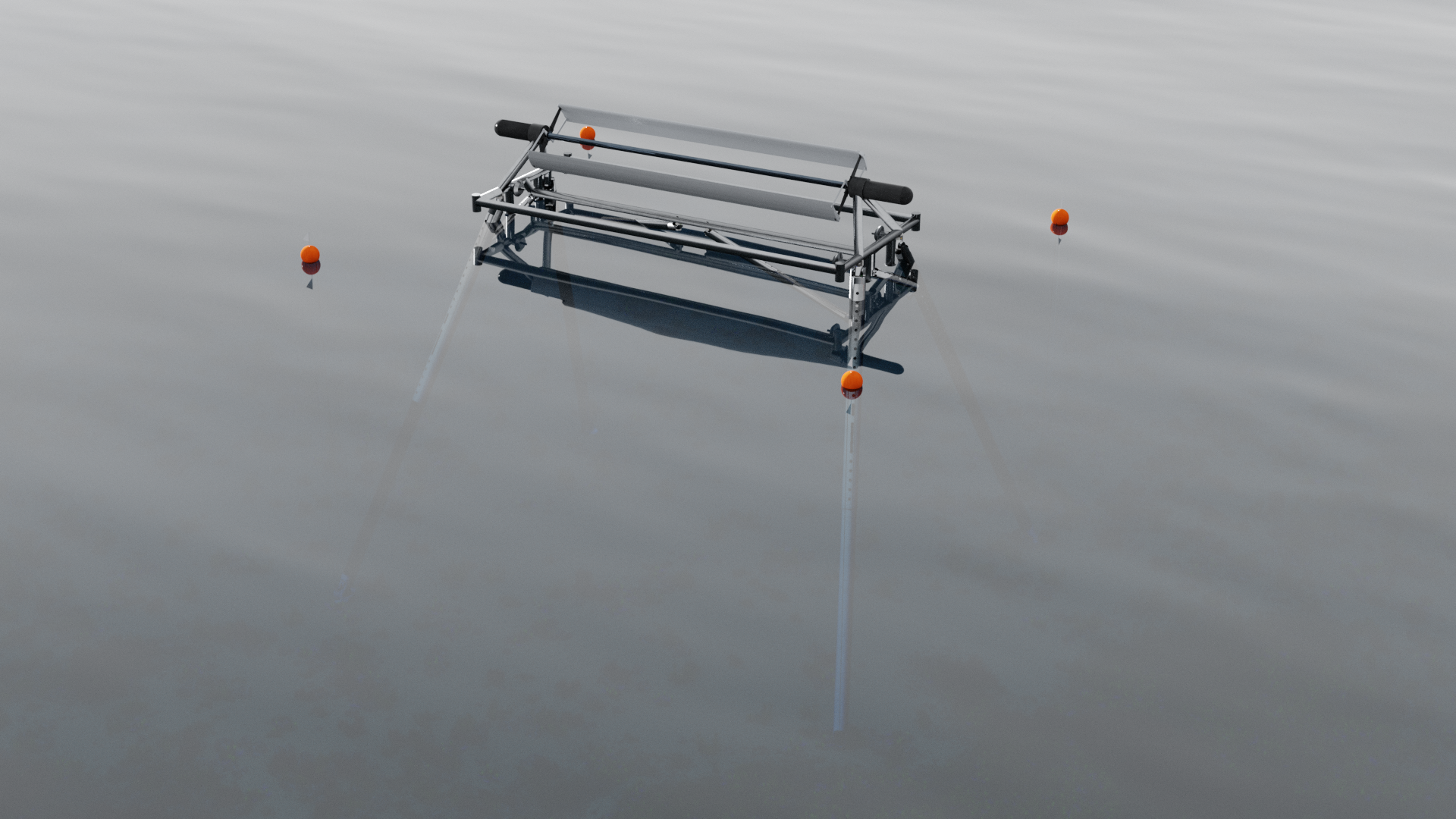 For maintenance the CycWEC can be lifted out of the water 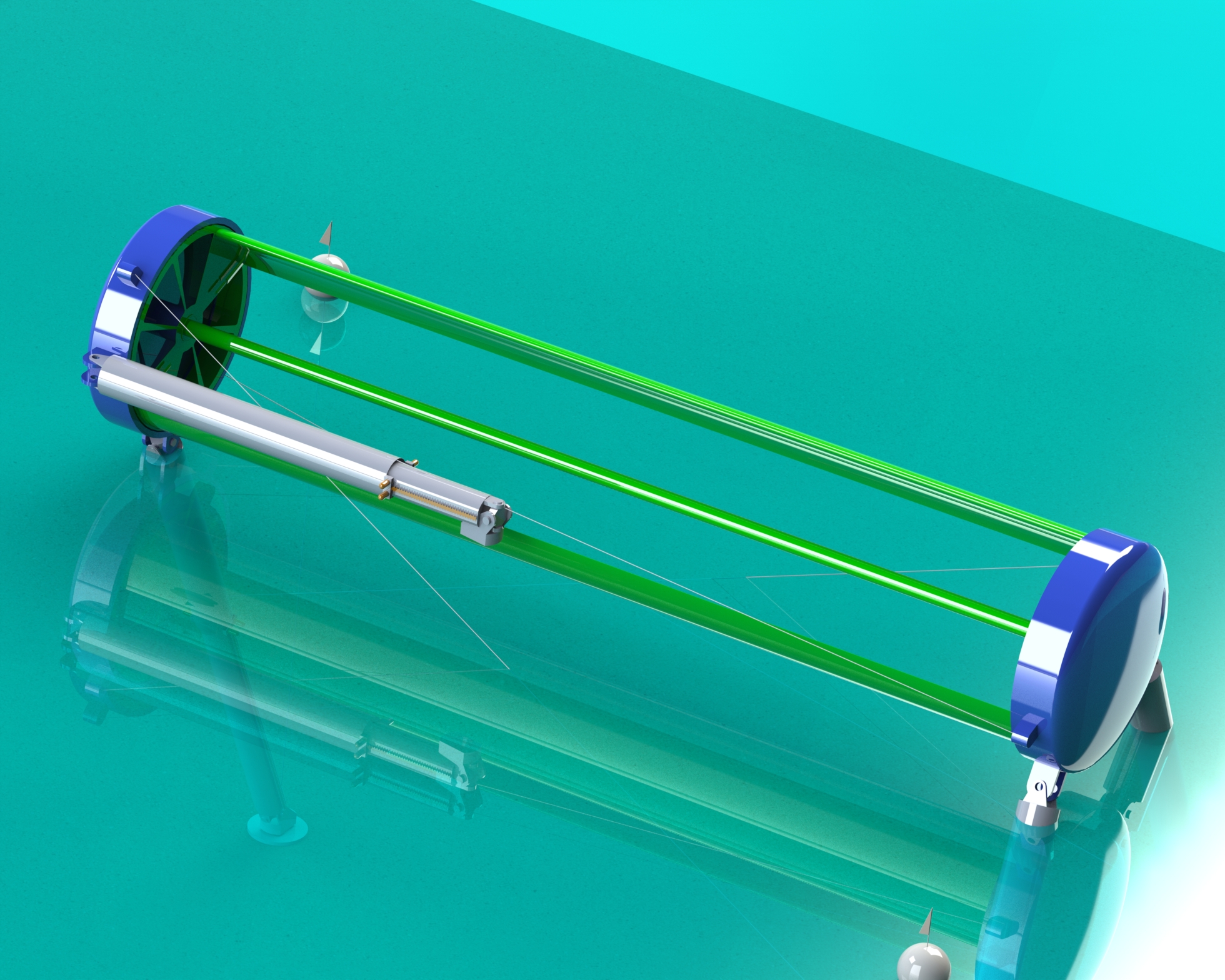 For maintenance, individual legs can be lifted out of the water

What sets the CycWEC apart from the competition 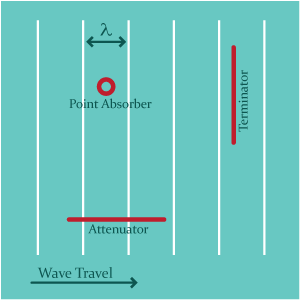 A wave Terminator is aligned parallel to the incoming wave crests, and for the same converter size captures more wave energy than Point Absorbers or Attenuators. This reduces the cost of energy. Of the three designs, the Terminator is the only device that proportionally produces more power when its size is increased. This enables utility scale power production.

Lift from air- or hydrofoils is used in most of modern energy conversion, like wind turbines, jet engines, ship propellers and others. Utilizing lift reduces hydrodynamic losses, and as a result more wave energy is converted to electricity. The CycWEC is the only wave energy converter utilizing lift to extract energy from ocean waves. 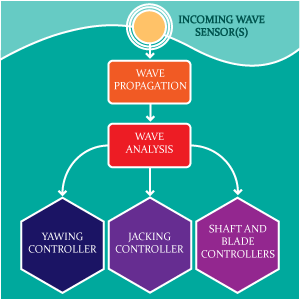 The proprietary Atargis CycWEC feedback flow control algorithm drives efficient power production from ocean waves. For each incoming wave, feedback flow control enables the CycWEC to position itself for optimal power extraction. The real-time control algorithm maximizes the effectiveness of the hydrofoils to achieve wave power extraction of 95% or more. 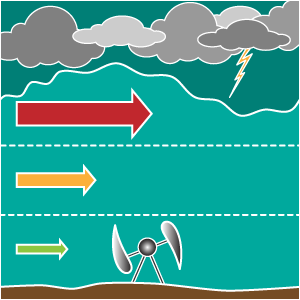 Many ocean trials of wave energy converters (WECs) have been prematurely ended during storms. The ocean surface during a storm causes huge structural loads, which is why a surface-based WEC needs to be designed 5-10 times stronger than the operational loads in order to survive there. The CycWEC on the other hand can be submerged further below the surface in a storm where the storm has less impact, which is why it experiences storm survival loads that are smaller than the operational loads. 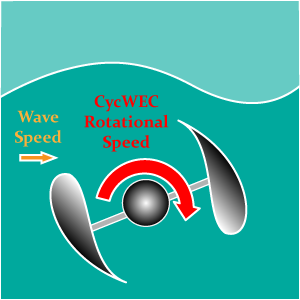 Hydrofoils can operate at a faster speed than the fluid from which they extract power, unlike buoyancy or drag based devices, which can only operate at speeds below the fluid speed. Because hydrodynamic forces scale in a quadratic fashion with velocity, the increase in rotational velocity allows for a reduction in device size if equal amounts of power are being converted. 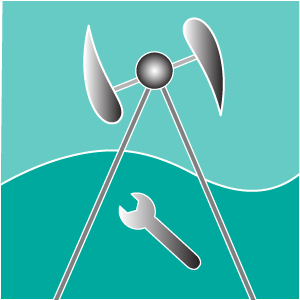 With its unique mooring and leg jacking mechanism, the CycWEC can be fully lifted fully out of the water for maintenance. This eliminates the need for diving or expensive lifting equipment to perform maintenance. While it is removed from the water, there are no loads on the converter or the power takeoff system, so that any of these components can be fully serviced on site. This all but eliminates the need to transport the CycWEC back to port in order to perform scheduled or unscheduled maintenance.

How Wave Power is converted to Shaft Power and Electricity 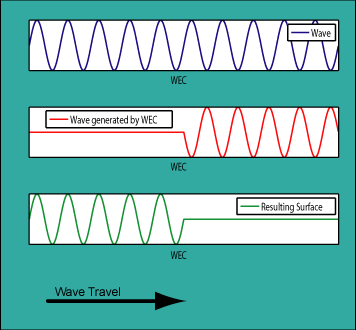 Wave Termination
How the CycWEC Extracts Energy from Waves

The figure on the left shows how wave energy can be extracted from a harmonic wave, which is shown in blue. The wave travels left-to-right, and if all of its energy has been absorbed, there would be no wave on the right side of the plot any more as shown in green. This is the stated goal of wave termination, and if achieved, the wave will end its travel at the wave energy converter, which is located in the center of the plot.

In order to achieve this, the WEC actually needs to generate a wave of its own, shown in red. This wave has the same wave length and wave height as the incoming (blue) wave, but is exactly out of phase: When the blue wave features a wave crest, the red wave features a wave trough. The blue and red wave combined lead to the observed green wave shown. 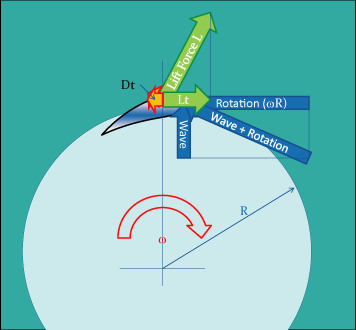 Shaft Torque
How the CycWEC Produces Electricity from Waves

As the incoming wave is cancelled, the CycWEC produces shaft torque which is used by a generator to produce electricity. The blue arrows in the plot show the various velocities that approach the rotating hydrofoil. The passing waves cause a velocity in the radial direction (labeled "Wave"), which together with the rotational velocity of the hydrofoil ("Rotation") approach the foil. Due to this combined velocity, the hydrofoil produces lift. It can be seen that this lift force is angled in the direction of rotation (to the right), and the tangential component of the lift force ("Lt") creates a torque at the main shaft.

How the CycWEC achieves cost efficiency 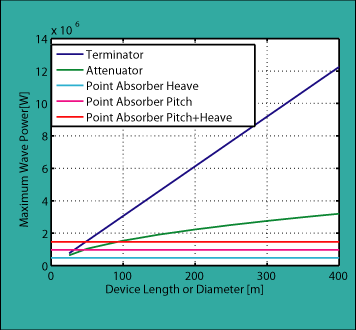 The plot to the left shows the maximum power that each class of wave energy converter can extract from an ocean wave with a significant height of 2m and wave period of 8s. It is an upper limit that can not be exceeded and was determined using analysis of the waves radiated by each device. An actual wave energy converter would likely only deliver about half of the power as electricity due to viscous losses as well as losses in the power takeoff system. As a result, only the wave Terminator can produce MW scale electric power. For larger sizes it can deliver similar power as modern wind turbines.

It is important to note that even as their size is increased, all of the point absorbers can not increase the power extracted. This is caused by waves radiated sideways by these devices, and the numerous failed attempts to develop point absorbers with MW scale output to date support this finding. The wave attenuator has a less than proportional increase in power extracted as its length is increased, since it also radiates waves sideways, although to a lesser degree. Only the wave Terminator is able to scale power extraction proportional to its length, which makes large devices cost efficient to construct.

For these reasons Atargis decided to develop a wave Terminator, since there is strong evidence that economies of scale will favor devices with large per-device power output. 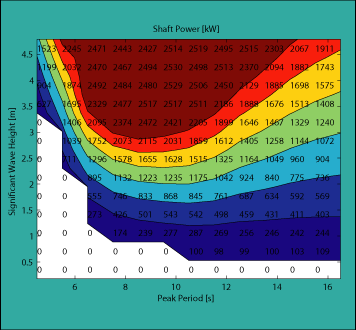 The Atargis proprietary simulation codes, which have been validated with tank experiments, enable us to predict how much power the CycWEC generates for different sea states. This is one of the two key metrics that determine the cost of energy: The more power the device generates, the cheaper the cost of energy will be.

This particular power matrix belongs to a CycWEC design with a diameter of 12m, foil chord length of 5m and foil span of 60m. The total maximum generator power is 2.5MW. The CycWEC is able to produce its design power for a large range of sea states, which indicates high annual power production. In a wave climate with 30kW/m average annual wave power, for which this design was optimized, the CycWEC converts on average 38% of the wave energy to electricity, and produces about 5.4GWh per year. 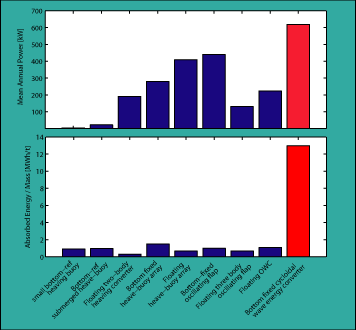 A recent study performed by Atargis Energy compares the CycWEC design to many other wave energy converters for which performance data has been published. Two of these performance metrics are shown on the left: The average annual power production, and the the energy produced per year divided by the mass of the device. The latter is an important metric since a device with higher energy production per weight will produce a lower cost of energy, since it is less expensive to construct

The CycWEC outperforms all other wave energy converters in both metrics, indicating that it will produce energy at a far cheaper cost than the established devices.

The in-house Atargis Wave Flume is an important step in testing different components of the CycWEC at a 1:100 scale. Key functionality of the CycWEC, including the controls system that enables effective wave cancellation, has been proven in the wave flume. The linked video demonstrates the wave cancellation abilities of the 1:100 scale CycWEC model that was tested in the Atargis wave flume in 2021. These wave flume tests were supported by a Department of Energy grant. 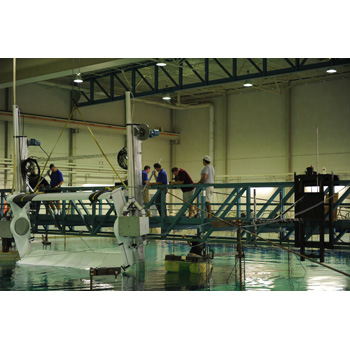 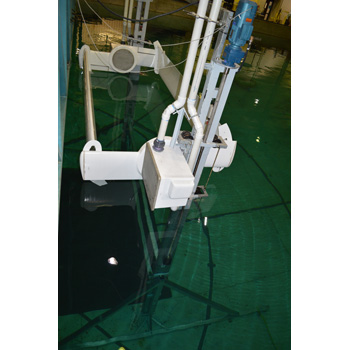 CycWEC lifted out of water 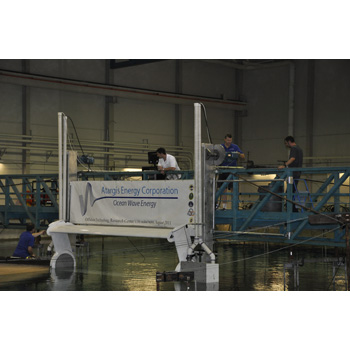 CycWEC being lowered into water 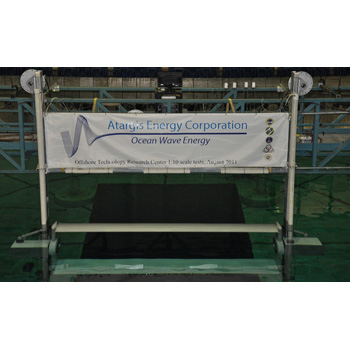 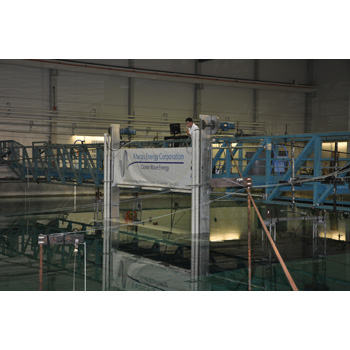 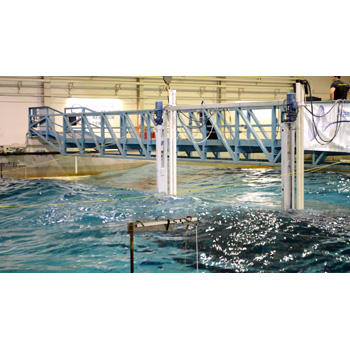 In 2011 and 2012 Atargis Energy conducted two testing campaigns under funding from the Department of Energy at the Texas A&M Offshore Technology Research Center wave basin. These 1:10 scale tests allowed for the measurement of the power production for the first time and also established the wave radiation pattern of the device. These two key pieces of information enabled the development of advanced numerical simulation codes in subsequent years, which in turn were used to optimize the design and control system of the CycWEC.

Simulation Codes and Use

Since the CycWEC uses hydrofoil lift to convert wave power to shaft power and electricity, the existing commercial and academic potential flow solvers and panel codes were not capable of simulating the interaction of the CycWEC with the waves. Thus, Atargis developed its own in-house codes to determine device performance at the model as well as the full scale.These inhouse codes allowed Atargis to optimize the design and performance of the CycWEC.

Based on experimental observations, it became clear that the three dimensional wave radiation pattern of the CycWEC is an important factor in device performance. To investigate this, Atargis developed a wave radiation simulation code, which in combination with a control volume analysis, can be used to determine how much wave power is absorbed and radiated away by the device.

The simulation shown in the video shows how a CycWEC with a span of 1, located at x=y=0, absorbs wave energy from a harmonic wave traveling from left-to-right. Wave crests and troughs are shown in green and blue, respectively. To the right of the device, a wedge-shaped wake with largely reduced wave heights in white can be seen. This indicates that wave energy has been absorbed.

Through a collaboration with Dr. Tiger Jeans at the University of New Brunswick, and his student Chris Caskey, initial CFD simulations with the commercial code Fluent were performed. These have a higher fidelity than the results from the Atargis potential flow solver, since viscous effects are included in the simulation.